Senegalese and French, she participated from 1962 till 1965 at the formation at Simon Siegel’s school (the director was Ms Marguerite Lamotte) in Paris and received a diploma in physical education and harmonious gymnastics. Then, she founded her first dance studio in Dakar, 1968. Thanks to the influence of the dances she had inherited from her grandmother, a Yoruba priest, and to her studies of traditional African dances and Occidental dances (classic, modern) in Paris and New York, Germaine Acogny created her own technique of Modern African Dance and is considered to be the “mother of Contemporary African dance”.

Between 1977 and 1982 she was the artistic director of MUDRA AFRIQUE (Dakar), created by Maurice Béjart and the Senegalese president and poet Leopold Sedar Senghor. In 1980, she wrote her first book entitled “African Dance”, edited in three languages. Once Mudra Afrique had closed, she moved to Brussels to work with Maurice Béjart’s company, where she organised international African dance workshops, which showed great success among the European students. This same experience was repeated in Africa, in Fanghoumé, a small village in Casamance, in the south of Senegal. People from Europe and all over the world travelled to this place.

Together with her husband, Helmut Vogt, she set up in 1985, in Toulouse, France, the “Studio-Ecole-Ballet-Théâtre du 3è Monde”.
After having been away from the stage for several years, Germaine Acogny made her come back as a dancer and choreographer in 1987. She worked with Peter Gabriel for a video clip and created her solo “Sahel”. Other choreographies follow. Her solo “YE’OU”, created in 1988, tours on all continents and wins the “London Contemporary Dance and Performance Award” in 1991.
In 1995, she decides to go back to Senegal, with the aim of creating an International Centre for Traditional and Contemporary African Dances: a meeting point for dancers coming from Africa and from all over the world and, a place of professional education for dancers from the whole of Africa with the aim to guide them towards a Contemporary African Dance. The construction of the Centre -also called “L’Ecole des Sables”- was achieved in June 2004. Although, since 1998, three-month professional workshops for African dancers and choreographers were organised every year. About 40 dancers from all over Africa met, exchanged and worked together each time.
In 1997, Germaine Acogny became Artistic Director of the “Dance section of Afrique en Creations” in Paris, a position she held until September 2000. During this time, she was responsible for the Contemporary African Dance Competition, an important platform for young African choreographers.

"The artistic movement in which I inscribe my own work, while rooted in our popular traditions, is not a return to our roots. On the contrary, it is a very different path, resolutely urban and modern, reflecting the context in which Africa lives today, the Africa of buildings, the Africa of great international contradictions. We don't want to subjugate, to infer black dance. We only want it to impose itself by its own character in modern civilization and to take its rightful place. It will then fully play its role of animation and reaction." 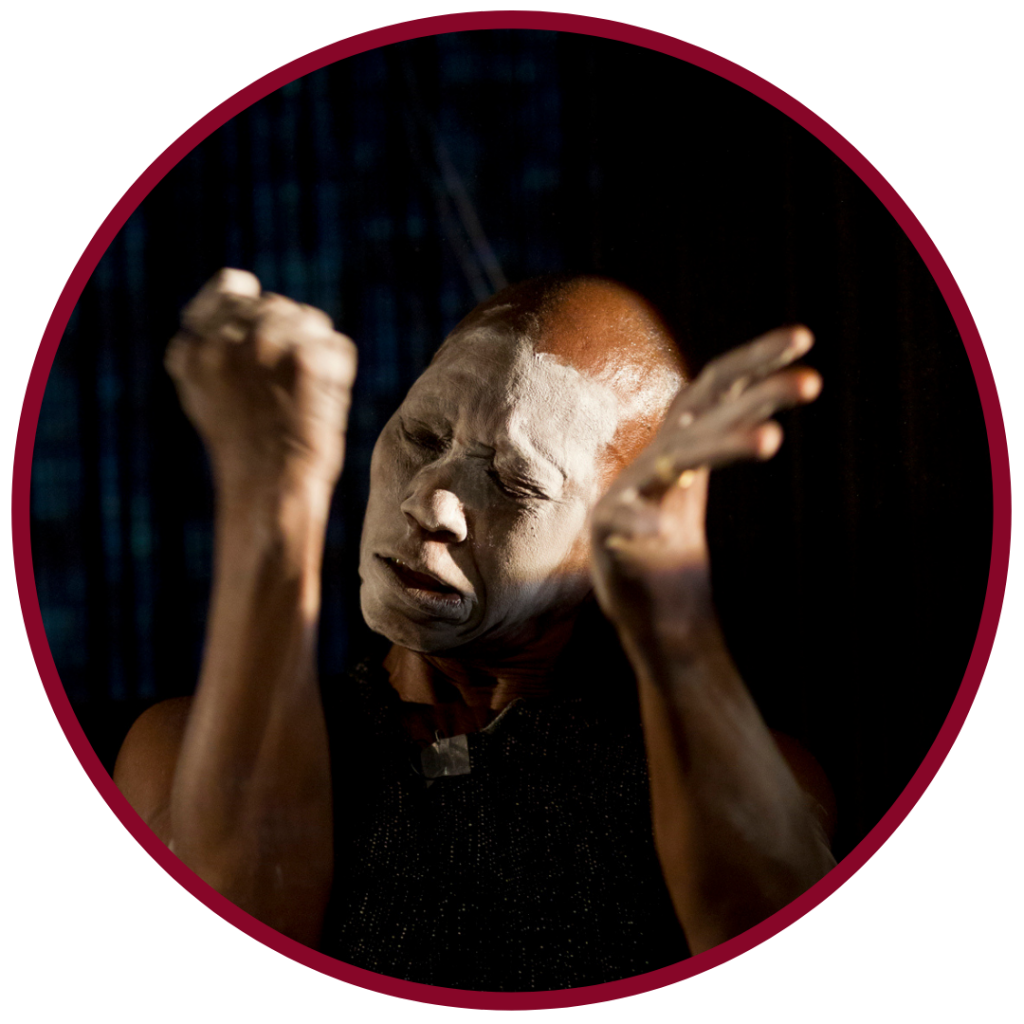 In 2005, she was invited as regent at UCLA (University of Los Angeles).
Her solo “Tchouraï”, created in 2001, choreographed by Sophiatou Kossoko was successfully touring until 2008. She has presented it in France (Theatre de la Ville, Paris), Germany, Belgium, Holland, Denmark, Italy, the US (New York, Chicago) Brazil and in China (first Contemporary Dance Festival in Shanghai).
In 2003/2004, she created the piece “Fagaala”, for her company JANT-BI, based on the genocide in Rwanda. It was co-choreographed with Kota Yamazaki/Japan for 7 African dancers, a fusion between Butoh and traditional and contemporary African Dances. It had already three very successful tours in the US, and was performed in Europe, Australia (Melbourne Festival, Sydney Opera House) and in Japan.
In 2007, she and Kota Yamazaki received a BESSIE Award (New York Dance and Performance Award) for “Fagaala”. 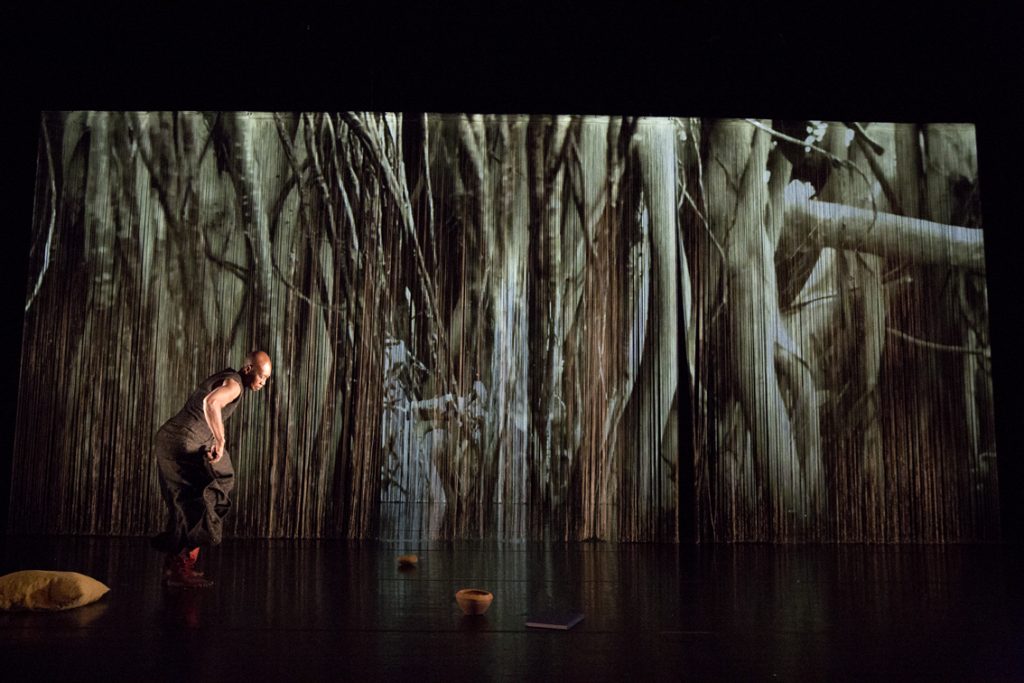 Later that year, the great challenge was the choreographic part of the OPERA du SAHEL, an important African creation, initiated and produced by the Prince Claus Fund in Holland. It premiered in Bamako in February 2007, followed by performances in Amsterdam and Paris and a first African Tour in 2009.

In 2008, another choreographic work was organised as a collaboration between Jant-Bi company (7 male dancers) and Urban Bush Women company (7 Afro-American female dancers) from New York. This new creation “Les écailles de la mémoire – Scales of memory” was created by her and Jawole Zollar, the artistic director of Urban Bush Women and had great success during several touring in the USA and in Europe. Her creation, the solo “Songook Yaakaar” had its Premiere at the Biennale de la danse in Lyon in September 2010.

In 2014 the French choreographer Olivier Dubois created a solo piece for Germaine Acogny “Mon élue noire – Sacre no.2” based on the original music of “Le Sacre du printemps.” In 2015 her new solo creation “Somewhere at the beginning”, came out in collaboration with theatre director Mikael Serre, a creation that combined dance, theater and video. The premier took place at the Grand Theatre de la Ville du Luxembourg in June 2015. She continues to collaborate with international schools and Dance Centers and regularly teaches master classes. From January 2015 she submitted the Artistic Direction of the Ecole des Sables to her son Patrick Acogny.

In 2020, Germaine Acogny and Helmut Vogt made the decision to hand over the role of Artistic Direction and custodian of the Ecole des Sables to two of its trusted Alumni that are also holders of the Acogny Technique Diploma: Alesandra Seutin and Wesley Ruzibiza, to work alongside Paul Sagne, who has been working and evolving within Ecole des Sables for the last 15 years and who has now been appointed Administrative Director.

Germaine Acogny was decorated as “Pioneer Woman” by the Senegalese Ministry of the Family and the National Solidarity.

Germaine Acogny was given in 2004 a special recognition in form of a grant by the Foundation for Contemporary Performance Art, New York.

In 2008, the African Magazine “Jeune Afrique” selected Germaine as part of the 100 personalities who “make” Africa.

In 2009, she received the “Commandeur dans l’Ordre des Arts et Lettres” distinction from the French Republic.

In 2012, she received the “Commandeur des Arts et Lettres” distinction from the Senegalese Republic.

In 2016, the magazine of Africa selected Germaine as part of the 50 intellectuals of Africa.

Germaine Acogny receives a New York BESSIE Award for outstanding performance in the solo “Mon élue noire-sacre # 2” and an Award for Lifetime achievements in the field of choreography, movement and dance from the Cairo International Festival for Experimental and Contemporary Theatre.

Any cookies that may not be particularly necessary for the website to function and is used specifically to collect user personal data via analytics, ads, other embedded contents are termed as non-necessary cookies. It is mandatory to procure user consent prior to running these cookies on your website.