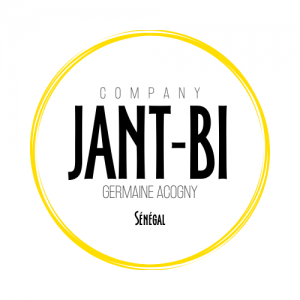 Company was created in 1999 with the dancers who had participated in the first workshop of the International Centre for Traditional and Contemporary African Dances at the “Ecole des Sables” in Toubab Dialaw in 1998.

Jant – Bi Company remains in close contact with the Centre, which is both a place of meetings and exchanges for dancers and choreographers from Africa, the African Diaspora and different cultures from all over the world. In this way, each choreographic piece reflects the spirit of the Centre.

Through contact with a choreographer representing another culture and another style of dance, a work of fusion is accomplished between this style and the essence of African dances. Susanne Linke’s first choreographic project under the gaze of Germaine Acogny, “Le coq est mort” (1999), is an encounter between German dance-theatre and African dance, and the second, co-choreographed by Kota Yamazaki / Japan and Germaine Acogny “Fagaala”, between Butoh and traditional and contemporary African dance (2004). The project “The scales of memory” was born from a long collaboration between choreographers Jawole Jo Zollar from the United States and Germaine Acogny from Senegal and their respective companies – the 7 women of Urban Bush Women and the 7 men of Company Jant-Bi.

In 2007, Patrick Acogny, under the outside eye of Germaine Acogny, created “Waxtaan”, which with some of the most beautiful traditional dances from different African countries, becomes a contemporary creation based on imagined conversations between African heads of state. In 2012, the company focuses on dancers and “Afro-Dites / Kaddu Jiggen” is born under the creative eye of Patrick Acogny. In 2014, “At the same time we were pointing…”, the latest creation with the famous South African choreographer Robyn Orlin, will be born.

Between the creations of men and women’s companies, Germaine Acogny has several solos to her credit such as; “YE’OU” (Awakening) which won the 1991 London Dance and Performance Award, “AFRICA, CE CORPS MEMORABLE” based on the poems of statesman and poet L.S. Senghor, “TCHOURAÏ” a choreography by Sophiatou Kossosko, “Songook Yaakaar”, a choreography by Pierre Doussaint and and Germaine Acogny, “Mon Élue noire – Le sacre 2” for Germaine Acogny by the choreographer Olivier Dubois, “A un endroit du début”, in collaboration with the director Mikael Serr.

NEW VISIONS FOR THE COMPANY JANT-BI

JANT – BI GERMAINE ACOGNY
A new mixed company composed of 7 dancers from Africa and the international Diaspora. A company that wants to be an ambassador for the TGA, and for the history and vision of the École des Sables. It wants to be not only new but also revisited, reappropriated and ready for the challenges of the century, those of giving a voice and above all of proposing its own aesthetics.

JANT – BI II
A junior company of dancers based in Senegal, Jant-bi II also serves as a reservoir and a pied-à-terre for the senior company. The company’s basic mission is the training, creation and above all the dissemination of dance and its role as an element of development and social cohesion. Its ambition is to promote dance and make it accessible by 2030 in all local communities in Senegal.